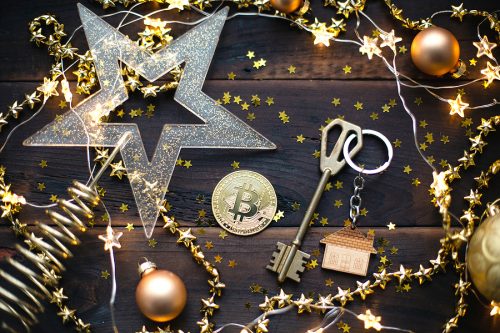 Getaway weekend to a Bitcoin Bush Bash
The first bush bash next year will be held in Beechworth, Victoria, a picturesque and well-preserved town that boomed in the 1850s gold rushes. Hard money proponents flock there in March for the Bitcoin Bush Bash. Bitcoiner or not, a loved one is sure to enjoy a weekend away here. If the timing isn’t right, then consider one of the later events in Yeppoon, Queensland, or Murrurundi, New South Wales. The events themselves, are free to attend as costs are generously defrayed by the Bitcoin Moon Fund.

Stickers
For those who may like to show off their enthusiasm for our emerging monetary standard, or who want to advertise their disdain for creeping authoritarianism, a pack of stickers may fit the bill. Ideasarelikeflames is an Aussie bitcoiner and graphic designer that offers a great range of stickers. He has been kind enough to offer these in a DIY library. Half-a-dozen of these will be available for purchase at the Murrurundi bush bash that will be held on the last weekend of November.

Signing devices
Do you know a bitcoiner that could/should be thinking of upgrading their security? An offline signing device (aka a hardware wallet) could be something fun to collaborate on. The recipient of your gift may even return the favour by guarding a key to your multisig with their new device and their better understanding of bitcoin. Hardware options are extensive. Some of the best are the Coldcard, Passport, Seedsigner (a project in itself), Bitbox02 and Jade.

Node hardware
Running your own node on the bitcoin network doesn’t require fancy hardware. This is one of the great features of bitcoin. Without breaking the bank, you can help a loved one audit the entire bitcoin blockchain and supply or run a lightning node. One for the budding self-sovereign person in your life. There are a range of pre-built nodes available such as the Ronindojo, My Node, Nodl or Embassy. An alternative is to repurpose older or second-hand hardware and spin up a node yourself with a little command line action. Aussie bitcoiner and tech wiz, Ketan, published a beaut’ guide on this recently and he can even help in getting up and running.

Blockclock mini
The blockclock spawned the Moscow time meme and its one of the most sought after bits of bitcoin bling. The Blockclock mini displays a range of bitcoin metrics and price data and it looks great.

NFC cards
Tapping cards or phones to pay merchants has become wildly popular. NFC tech has arrived for bitcoin. This is embodied in some new cards with embedded NFC chips. A couple of the coolest are the Tapsigner and the Satscard. The former functions like a hardware wallet and the later is versatile device for using bitcoin like a physical bearer instrument. The Boltcard is a bit of a project in configuring your own blank NFC card to make lightning payments. It is designed to allow you to spend bitcoin to merchants using a range of apps including VoltPay, which has a great UI and is built by Michael Little.