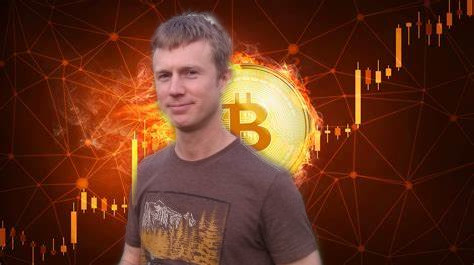 Nick, an accomplished research scientist, kindly responded to our 21 Questions and shared what drew him to bitcoin, asserts that the fiat system may collapse soon and takes poorly researched journalism to task. Thanks for getting involved, Nick, and I’ll look forward to seeing you at a Bush Bash soon.

I was sceptical about bitcoin for a long time. I didn’t know how to value it and I really believed it would fade away over time. Later, a friend of mine (the poster of these articles!) perked my interest in it and after some lengthy discussions about the history of money and the security of the bitcoin network I decided to look into it some more. For me, the real turning point away from my sceptical viewpoints came after the quantitative easing that followed 2020, combined with the progression in bitcoin adoption over the last few years.

As a mechanism to conduct final and settled transactions peer to peer with confidence that the bitcoin monetary ‘policy’ won’t be interfered with.

I’m more interested in the economics side of bitcoin. Looking into bitcoin further has changed my view about the current fiat system, which I now think faces the very real possibility of a collapse that could happen in our lifetimes.

Any bitcoiner who is willing to take the time to show a newbie the ropes, particularly around how to take self custody.

“I now think [that the current fiat system] faces the very real possibility of a collapse that could happen in our lifetimes.

Nick Matovic on how bitcoin changed him

Ease of use and current popular opinion. I feel using bitcoin as a payment method (inc lightning) can be clunky at times. But on the other hand the user interface is steadily improving, new wallets are pretty slick and fairly easy to use and integration of bitcoin into payment systems is growing. There seems to be a lot of negativity towards bitcoin among the general population, which I assume is fueled by poorly researched journalism and this will take time to change. There even seems to be quite a few folk that work in the financial sector who haven’t done any bitcoin homework.

I don’t think it’s impossible that bitcoin fails or is superseded by a new technology. But what new technology is currently better? And what is the current alternatives…..Fiat?? Central bank digital currencies are still fiat, and potentially with even more controls over them than the current systems. Governments around the world have unsustainable amounts of debt and will probably push the current system to destruction. Just look at what is happening within the Euro for instance. The ECB is desperately trying to avoid fragmentation of the Euro and now that interest rates are rising they have recently introduced the ‘Transmission Protection Instrument’ (TPI) – essentially another tool they can use to finance fiscal deficits of highly indebted eurozone sovereigns. The TPI blatantly undermines financial discipline, and I wouldn’t be surprised if it was met with strong opposition from sovereigns with more responsible deficits if it was deployed. The Euro is on borrowed time.

Meanwhile, bitcoin has no lender of last resort, no sprawling body of governing bureaucrats and continues to function exactly as intended since the day it was born – consistently and predictably. Bitcoin adoption is growing and the network is more secure than ever. So what would you prefer, bitcoin or Euro’s? No prizes for guessing which one I’m backing.

“So what would you prefer, bitcoin or Euro’s? No prices for guessing which one I’m backing.”

No, but I would like to at some point.

9. Have you tried multisignature?

Have only tried it once – it seems like a great concept but it’s probably overkill for my needs.

Yes, I look forward to be able to use it more often.

11. Do you evangelize bitcoin?

Not often, but I’ll vouch for it in any relevant conversation about money.

Yes, the price provides a mechanism to value bitcoin.

I don’t know, perhaps Japan should do it – I imagine they have the infrastructure and know how to make it work.

I’ve attended a couple of local meetups but that’s about it. I’d like to go to one of the Bush Bash events one day.

16. How far have you traveled to meet with bitcoiners?

I’m not sure how relevant they are but I could see how some of these movements share values such as privacy, security, freedom and preservation of value.

I think the political situation around bitcoin could get really interesting, particularly once it becomes more ingrained in society. Perhaps it’s only a matter of time before we have a bitcoiner senator!

I love the creative ways people come up with to secure their private keys, sometimes hidden in art!

Following up on links from Twitter, Bitcoin Brisbane on Telegram and talking to bitcoiners.

In this article:21 Questions for Bitcoiners